A ‘Relaxed Beach Town’ Where There’s Plenty to Do

With five miles of Long Island Sound coastline, there are multiple beaches. But this ‘civic-minded’ place also has a walkable downtown and

In May 2020, when Allison and Dan Willis first toured their soon-to-be home in the Fairfield County, Conn., town of Fairfield, they noticed a paper sign taped to a wooden stake in the backyard. “It said, ‘Beach,’” Ms. Willis said, “and it pointed to a path in the woods.” 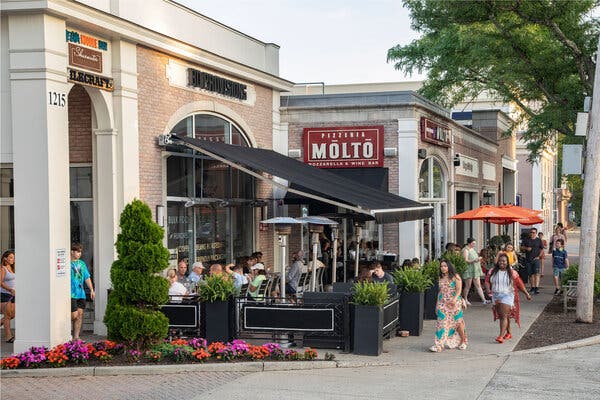 The couple and their two toddler-aged children followed the path to a small beach on Samp Mortar Lake. “I remember thinking, ‘This is pretty. Maybe we’ll go here once in a while,’” she said.

Mr. Willis, 38, had recently started his job as a toxicologist at Henkel Corporation, in Darien. Ms. Willis, 39, is a senior director at Quotient, a digital promotions company in Manhattan. Because of the pandemic, both were working remotely from their home in neighboring Trumbull. With an eye on the growing frenzy in the suburban real estate market, they decided to sell their house. “I had a hunch that the timing was right,” Ms. Willis said.

They wanted to move to Fairfield, a place they knew well. Mr. Willis had attended Fairfield University as an undergraduate, and Ms. Willis found herself in the town often: “Shopping, the gym, the playgrounds — I was heading there for almost everything I wanted to do.”

Last July, the Willises paid $795,000 for a 2,076-square-foot, four-bedroom colonial built in 1968 on 0.55 acres in the Lake Hills section of town. For the rest of the summer, they spent countless hours on that little beach through the woods. 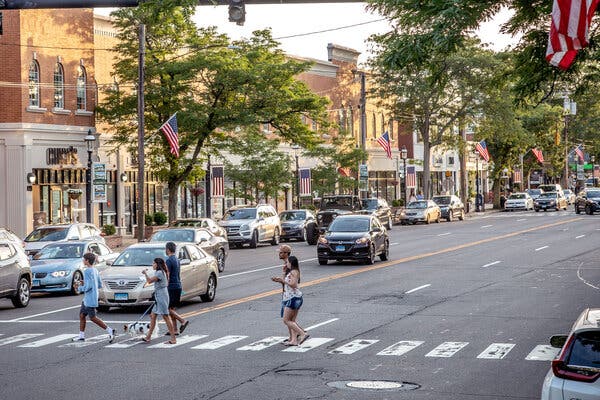 Beaches are among Fairfield’s defining features. The 32-square-mile town has five municipal beaches along its five miles of Long Island Sound coastline, five private beaches around Samp Mortar Lake and another municipal one a mile north, on Lake Mohegan. Fairfield is also distinguished by the presence of two universities (Fairfield and Sacred Heart) and a walkable downtown full of independently owned shops and restaurants. For Ms. Willis, the combination of those traits creates an ideal synergy — “the perfect blend of a relaxed beach town and a fast-paced, trendy lifestyle.”

Brenda L. Kupchick, a third-generation resident and the town’s first selectwoman, touted other qualities. One is Fairfield’s commitment to sustainability, which led to its selection as one of five Connecticut towns granted Sustainable CT’s 2018 Silver Certification. She also cited Fairfield’s ranking as seventh nationally in Smart Growth America’s “Best Complete Streets Policies of 2018.”

“The idea is to make our streets more accessible for all types of users — people with disabilities, cyclists, runners, walkers — not just cars,” Ms. Kupchick said.

She described Fairfield’s population of roughly 62,000 as socioeconomically diverse, especially compared with nearby towns like Westport and Darien. “You have some very wealthy people here,” she said, “and you have people living paycheck to paycheck.”

She called the community “civic-minded”: “We have so many volunteer boards and commissions, and usually we have more applicants than seats to fill.” 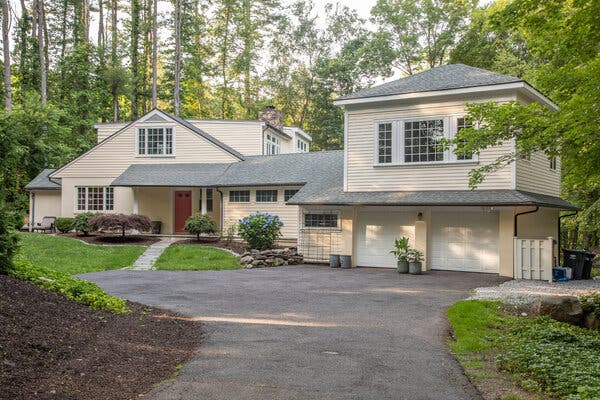 Ross D. Murray, Fairfield’s assessor, said the town has 16,445 single-family homes and 900 multifamily homes. There are 2,169 condominiums in 210 complexes; a single co-op building with four units; 58 rental apartment buildings, with more being built; and 216 affordable housing units in 23 existing complexes, with nearly 350 additional units in the works.

As in many towns, market activity in Fairfield continues to be brisk, and bidding wars and over-asking closings are common. Prices reflect the spectrum of available housing. Julie Vanderblue, a broker and president of the Higgins Group agency and chief executive of the

Vanderblue Team, said properties run from $175,000 for a simple condominium to between $400,000 and $2 million for a single-family home in a more densely populated neighborhood. Prices can go as high as $18 million for a waterfront home or a lavish house in Greenfield Hill. 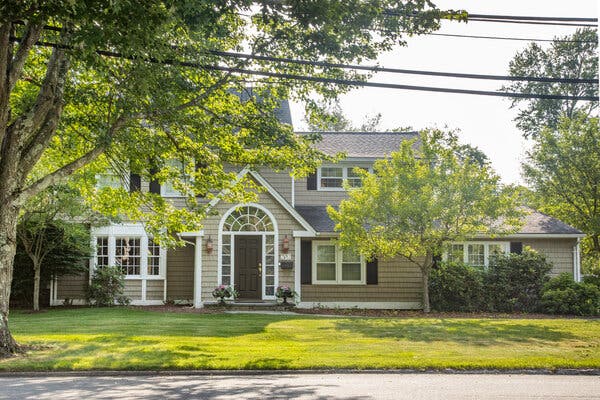 Judy Mitchell, an agent with William Pitt Sotheby’s International Realty, has noted a pandemic-based shift in demand. “Pre-Covid, buyers were looking for in-town living with small yards and walkability,” she said. “But with more people working from home, we’re seeing a resurgence in Greenfield Hill. Before, nobody wanted two-acre zoning. Now people seem to crave privacy.” 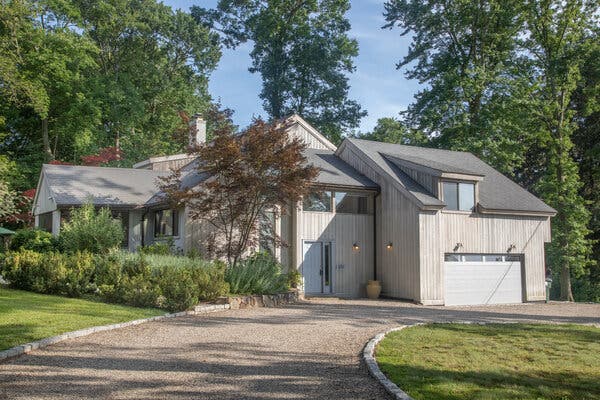 Along with the scenic beaches, Fairfield residents can enjoy two town-run marinas, several public and private golf courses and year-round tennis on Fairfield Tennis’s six courts. Nature-lovers can explore the Connecticut Audubon Society’s 155-acre Roy and Margot Larsen Wildlife Sanctuary and the Birdcraft Museum and Sanctuary, the first bird refuge in the country.

Cultural options abound. There are two branches of the Fairfield Public Library and, in Southport, the Romanesque Revival-style Pequot Library. Downtown, the Fairfield Theatre Company presents live music, comedy and film. Around the corner, the Sacred Heart University Community Theatre, newly refurbished and reopened after about a decade, features film and performances. Also downtown, Sherman Green is home to the Fairfield Farmers Market, a town-sponsored summer concert series and other events. 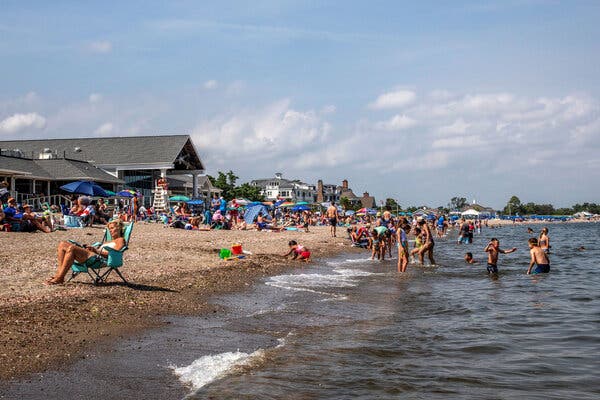 The Schools Following the worst of the pandemic, the streets are coming back to life, Ms. Kupchick said: “This is one of the few places where the train station, the downtown and the beach are all within walking distance of one another.”

Fairfield’s roughly 9,400 schoolchildren are served by the Fairfield Public Schools district, which covers all of Fairfield and Southport. The

The district also offers the Walter Fitzgerald Campus, an alternative high school program, and the Early Childhood Center, for ages three and four.

Data from the Connecticut State Department of Education’s EdSight portl indicated that on the 2018-19 Smarter Balanced assessments, 76.5 percent of the district’s fourth-graders were proficient in English language arts and 73 percent were proficient in math; statewide equivalents were 54.6 percent and 52.5 percent. Mean SAT scores for the 2018-19 graduating class were 566 in evidence-based reading and writing and 570 in math; statewide means were 514 and 500.

Commuters to Manhattan, 60 miles southwest, can catch Metro-North Railroad’s New Haven line at any of three Fairfield stations: Southport, Fairfield and the newest addition, Fairfield Metro, opened in 2011 and flush with parking spots. Rush-hour trains to and from Grand Central Terminal take 71 to 100 minutes, and include two weekday express trains from Grand Central to Fairfield and Fairfield Metro. Round-trip fares are $27 off-peak, $36 peak and $391 monthly; currently all trains are considered off-peak.

Fairfield is traversed by the Merritt Parkway, Route 1 and Interstate 95, which has several Fairfield on- and off-ramps. The drive to the city can take less than 70 minutes, depending on traffic. 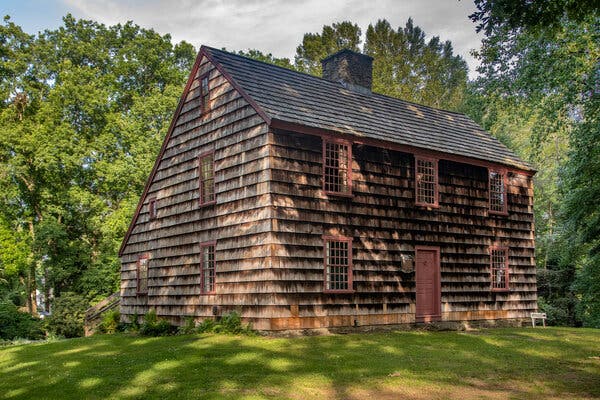 Maintained by the Fairfield Museum and History Center, the saltbox-style Ogden House was built in 1750 for David Ogden and his bride, Jane Sturges, and remained the family home for the next 125 years. It has been listed on the National Register of Historic Places since 1979.Credit...Tony Cenicola/The New York Times

In late 1692, after Mercy Disborough was accused of witchcraft, she declared her innocence and asked to be tossed into a pond. At the time, which coincided with the Salem witch trials in Massachusetts, the ability to float supposedly proved a witch’s guilt, which was punishable by death. According to the Fairfield Museum and History Center, Ms. Disborough was one of six Fairfield County women alleged to be witches; she and another suspect, Elizabeth Clawson, were tried in the county courthouse, now the site of the Fairfield town hall complex.

The women were brought to what was then Edward’s Pond, bound hand to foot, and pushed in. Although witnesses were said to have testified that both women “swam like a cork,” after numerous deliberations neither was executed. In 1869, the town filled in Edward’s Pond but preserved a depression, a reminder of an unsettling era in Fairfield’s past.